If you haven’t read many of my past reviews, I’m kind of a pizza junkie and this place doesn’t disappoint- it’s one of the best! Luckily, this place isn’t far from my home. It’s located in the old Worthington Shopping Plaza on High Street, which is coming back to life with a stream of new businesses. The only downside to this is that I doubt pizza will be on my new post-election diet and with the proximity I’m sure I’ll keep coming back. Once you go inside it has a very lively atmosphere; even on a Thursday it was throughly jumping with patrons. Once you start eating the food and enjoying their vast beer collection, you’ll understand why. 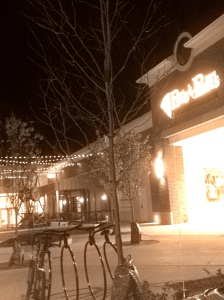 They have quite a selection of speciality pizzas but you can also make your own combinations with a laundry list of ingredients. The best part is that the dough for the pizza is made in house daily and comes from a family, New York style, recipe. The crust on this pizza is addictive! They brush it with a garlic infused olive oil and then sprinkle it with kosher salt before adding on their base of a mixture of mozzarella and provolone. So back to that crust, it’s literally so good that I wish they sold baked strips of it to just consume as an appetizer or as a to go item. It’s like eating a good crusty bread that crunches under the weight of your teeth or at the slice of a knife. It’s not a thick crust, but it’s fluffier than a thin crust pizza too. Basically, it’s AMAZING! 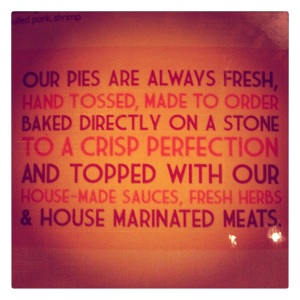 Ok, so they had more than crust so I’ll move on… I started off the meal with some of their Char-Grilled Hot Wings. Now they’re not actually spicy at all, but they are still delicious. They have a dry rub on them of cumin with some cilantro, and they have a good smoky flavor and the meat was tasty and moist. To me this would be a great meal in itself if you were looking to eat something healthier than pizza but didn’t just want to eat a salad- who wants to be that guy?!? Anyhow, they’re served with a creamy, house-made Gorgonzola dipping sauce which you’re bound to love. While it has a similar taste to Blue Cheese Dressing that is usually served with hot wings it has a lighter texture, most similar to a tzatziki sauce. 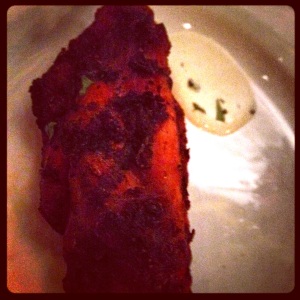 Another great thing about Pies & Pints is their obvious appreciation for Gorgonzola; and as a fellow Gorgonzola lover, I love them for it. The first slice of pizza I tried was their Red Grape Pizza. Now if you’re like me your initial reaction is, “Fruit on pizza? No thanks.” BUT you’d be wrong like me. The grapes were perfectly suited for this pizza with Gorgonzola cheese on top of their standard blend which causes it to not be so pungent for those who dislike it for that reason. If I wasn’t trying to sample as much as possible I would have likely stuck to this pie all night long. This was my favorite by far, and is one of their most popular pies too. 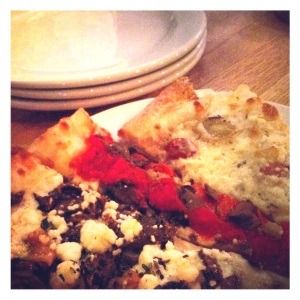 I ordered some samples of their draft beers, of which they have MANY, but got a Golden Belgium named Victory Golden Monkey and Elevator’s Dark Horse. They tasted great with the pizza, and of the waiters/waitresses have a great understanding of all their beers on site. Pies & Pints actually has a beer man, Ryan, for their multiple locations who makes their selections and trains the staff too- so don’t be afraid to ask questions, in fact I recommend it. 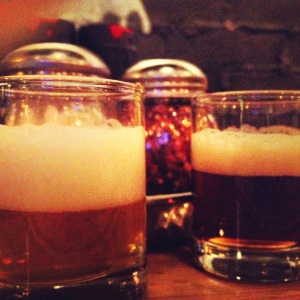 Once I had some beer in front of me I was ready to move forward with more pizza. I tried four more speciality pizza slices. The first was their Mushroom Garlic Pie, consisting of :  roasted mushrooms, feta cheese, caramelized onions, fresh roasted garlic and herbs. This was my second piece of pie and my second favorite pizza. Feta cheese is so good on pizza and when mixed with all of these deeply flavorful ingredients it’s PERFECTION. The garlic was never overwhelming and they obviously know a lot about their ingredients what combinations work sublimely together. Next I tried their Classic Pie (Pepperoni, sausage, mushrooms, banana peppers and tomato sauce) which for meat lovers is perfect and is understandably a classic pizza. The banana peppers add the perfect amount of heat to meld the flavors of this pie together. 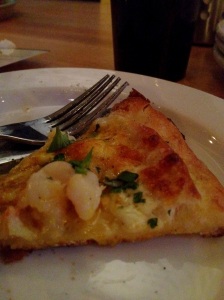 Then there was the Thai Pie. This is definitely a pizza for folks not looking for the classic and looking to mix it up a bit and try something new. This pie has shrimp, toasted coconut, Thai curry sauce, and topped with fresh basil and cilantro. First, I gotta admit that I LOVE toasted coconut, but you don’t really notice it just the hint of sweetness that hits your tongue after you taste and pick up on the curry sauce first. If they added more coconut I think it would just enhance the sweet & savoriness that they’re going for in this pizza. Lastly, was the Chicken Gouda Pie and it was a great way to end my array of pizzas. Anything, especially any pizza, with bacon on it is good bye me…and when the bacon is cooked to mouth watering crisp like this, it’s somehow even better! Besides chicken, gouda and bacon this pizza also has some red onion and a really tasty chipotle crema drizzled on top of it. This pizza has a wonderful balance of grilled chicken cheese and spiciness and I loved it! 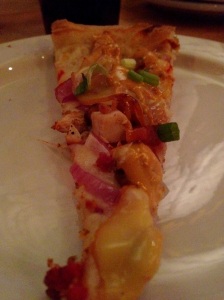 Although I could barely breathe I did also take two bites of their Chocolate Peanut Butter Brownie Terrine, which is made in-house. It’s layers of thin chocolate brownie and a crunchy peanut butter filling that is topped with chocolate ganache. It’s incredibly rich, but it’s a wonderful way to end a salty and savory meal. 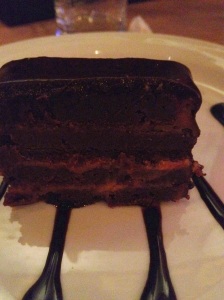 Would I come back? DEFINITELY. Over and over again? Yes! I would place this on top of my list for a good pizza in Columbus. The pizza here was so good, as served, that I never even had to add crushed red pepper or sprinkle/parmesan cheese- which is unheard of for me. I have to give it two thumbs up and would recommend it to anyone, whether you live in Worthington or not, to try this pizza. If you can stop by for lunch, they sell their pizza by the slice too for a reasonable price. Go GET SOME! 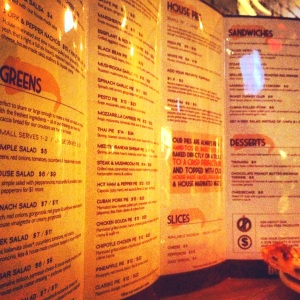 Element Pizza: Every Component is Exquisite

I have to say that I wish I would have tried this place sooner. From the pictures that I had seen and write ups that I had read, I knew this place was a must try. With all of that said, I still had no idea that I would like it this much. Probably the best crust on a pizza that I have ever had. While they do try to make everything in-house with Ohio ingredients they do splurge on one key ingredient- special blend of flour from Italy…but they do purchase it from Columbus’ own Carfagna’s. The flour is needed for this superior crust- a crunchy outer coating around a soft & spongy interior.This dough is made fresh daily for their pies. 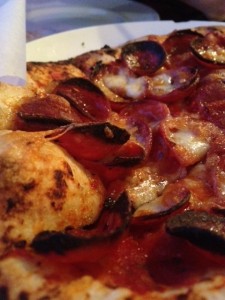 The ingredients atop the crust can be either of your own creation of combinations or you can pick from one of their thoughtfully put together 14 selections. The two that we ordered were their Americano pizza and their Arugula pizza. Of the two, it was the Americano that we enjoyed devouring the most. The amazing local pepperoni (that’s right, from right here in Columbus) to the fresh mozzarella and homemade tomato sauce; and then it is all dusted with some crushed red pepper. It’s the perfect amount of spice and DEFINITELY delicious. The second pizza, the Arugula, we both enjoyed. However, where Jason could have used less Arugula I tend to like my bacon more CRISPY (even a little burnt is fine by me)- but it was still a tasty spring pizza. 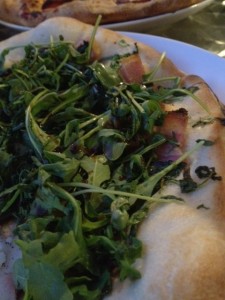 I got so excited to talk about the dough, that I skipped the beginning of our meal. We did start out with some great draft beers in mason jars and with an appetizer. If you come to Element’s and you like calamari then please do not leave without trying their Semolina Crusted Calamari. The calamari is superbly cooked and seasoned & they also serve it with an oil based sauce for dipping and some of their homemade marinara sauce. Personally, I couldn’t decide on which dipping sauce I liked more but Jason though the oil was the ultimate pairing. 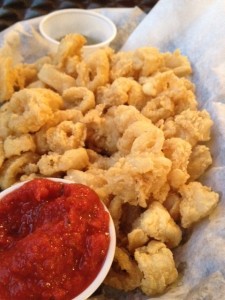 Whether you drop by for lunch to grab one of their paninis or salads or decide to make a dinner out of Element Pizza you can not go wrong. The prices are very cheap, but the quality is a godsend. Also, if you live close by they will deliver to you if they aren’t too busy so call ahead and make a plan for some Element Pizza. I give this downtown Columbus restaurant TWO THUMBS UP! 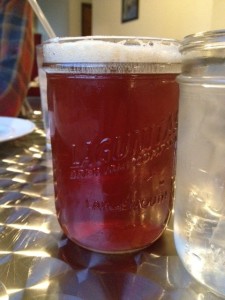 Harvest Pizzeria: The Way Pizza Should Be!

I cannot say enough good things about this place. From their ingredients, to how they get them, and then what they create with them. I have yet to enjoy their patio, but that day is rapidly approaching…

The interior consists of a lot of neutral colors, natural lighting from windows, and a lot of wood – all things I am a big fan of! There isn’t a ton of seating, so get there fast, but business wise it was a smart decision on their part to start small & build up a clientele before expanding to a large place. Anyhow, the ingredients are fresh and a wide variety of Ohio grown products to choose from. The pizza creations are baked in a wood-burning oven in the small kitchen – which you can see right into and watch them go to town on the dough. I could go on and on about wood-burning ovens, but I’ll digress…I just wish I had one of my own at home! 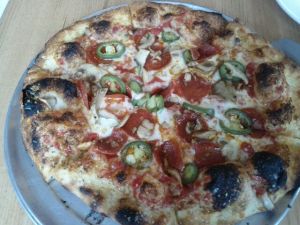 Like Yellow Brick, the menu has a few specialty pizzas for you to pick from or they also allow you to create your own. On this day Jason & I split a pepperoni, tomato sauce, mozzarella & provolone mix of cheese, jalapenos and mushroom pizza. DE-LI-CIOUS! If you aren’t starving when you get there, you will be as you sit down and smell the pizzas cooking. Now we did not get any appetizers while we were there but from the choices they have on the menu and the smiles on people’s faces sitting around us, as they ate them – it would be well WORTH IT to try them next time.

With that said, it was a strategic plan to not order apps so as to save room for dessert. And eat dessert we did. They have the BEST BLUEBERRY PIE I have EVER had (and for those of you who know me, you know just how much I LOVE ALL things BLUEBERRY!) and with ice cream on the side…it was the perfect end to a perfect meal. Seriously though, you should try the pie. Apparently, the owner’s mother makes them all herself. TWO THUMBS UP to yet another fantastic German Village restaurant!!