Back to life and food blogging! Boy have I missed it, but with no time to write and plenty of places to eat and photos of food backed up…I’m sure you’ll start to hear from me again much more regularly. So, off we go!

Coming here for brunch was my first trip to J. Liu. The Worthington location is very close to where I live, so after seeing it a few times I looked into what they’re ‘known for’ or type of food they do. After some mixed reviews on their Asian inspired menu, but hearing they had a brunch buffet that included some traditional items too- I knew I had to at least try it out on a weekend morning. I wasn’t exactly sure of what to expect besides a buffet, some type of breakfast-y foods and of course a Mimosa…which is really all I needed to hear to make it on my wish list!

It didn’t disappoint, but it didn’t amaze me either. They have a few tables outside (which I always love if the weather is decent at all), so we got to sit out on the patio. A good location, because it is right by the bar area where the buffet is served. The key here is that besides having a lot of good classic items they also had some good American style Chinese food here too. I tried a plate of staples like crispy bacon, home fries, waffle and eggs benedict but also mixed it up with some crispy crab rangoons. Everything on my plate was phenomenal except for the home fries, which were a little too soft and flavorless for my taste. However, nothing tastes better to me than some nicely crisped bacon, so they kind of had me weak in the knees from the get-go of approaching the food buffet with my plate. 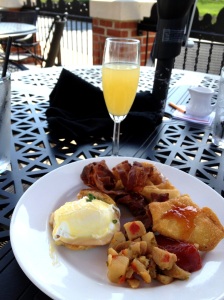 Jason basically tried everything! He had a couple of plates and tried, among other things, some lobster buttered white fish, crispy chicken and broccoli and lo mein noodles. While the white fish didn’t actually taste like anything special, the rest of the food was really delicious. Especially, for it being a buffet which you just assume food quality will go down with big food quantity, but at J. Liu that is not the case. The poached egg used on my egg benedict was cooked to perfection.

Additionally, they have a dessert table too! Since both Jason and I have a big sweet tooth, this is something we could not pass up. In fact, I specifically left room just for dessert. The nice thing about the dessert selection was that they were small and even bite size pieces. This is great because it allows the customer (me or you) to have as much variety as they desired for one full serving. Again, we tried a bit of EVERYTHING- which is why buffets are so wonderful! So we tried J. Liu’s chocolate covered strawberries, caramel apple pie bites, a white chocolate and raspberry cheesecake squares, five layer bars, a mocha cheesecake square and lemon bars. Everything was scrumptious, very flavorful, the cheesecakes were creamy, the chocolates were perfection and the lemon was the right amount of tart. I’m always a sucker for chocolate covered strawberries and Jason couldn’t stop with the white chocolate & raspberry cheesecakes (although the boy does LOVE both raspberries and cheesecake so neither of us were surprised). So my recommendation is to definitely save room for a cup of coffee and dessert. 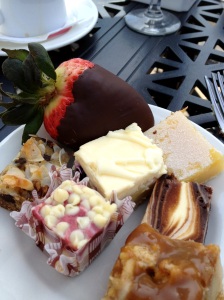 For $17 a person I would recommend that if you can splurge a little on breakfast then everyone should at least try it and see what you think. Due to the location, I’m sure that I will go back. However, if I lived elsewhere in Central Ohio it’s likely that I could easily find a cheaper and even more delicious weekend breakfast favorite. I give J. Liu’s Brunch a one thumb up!